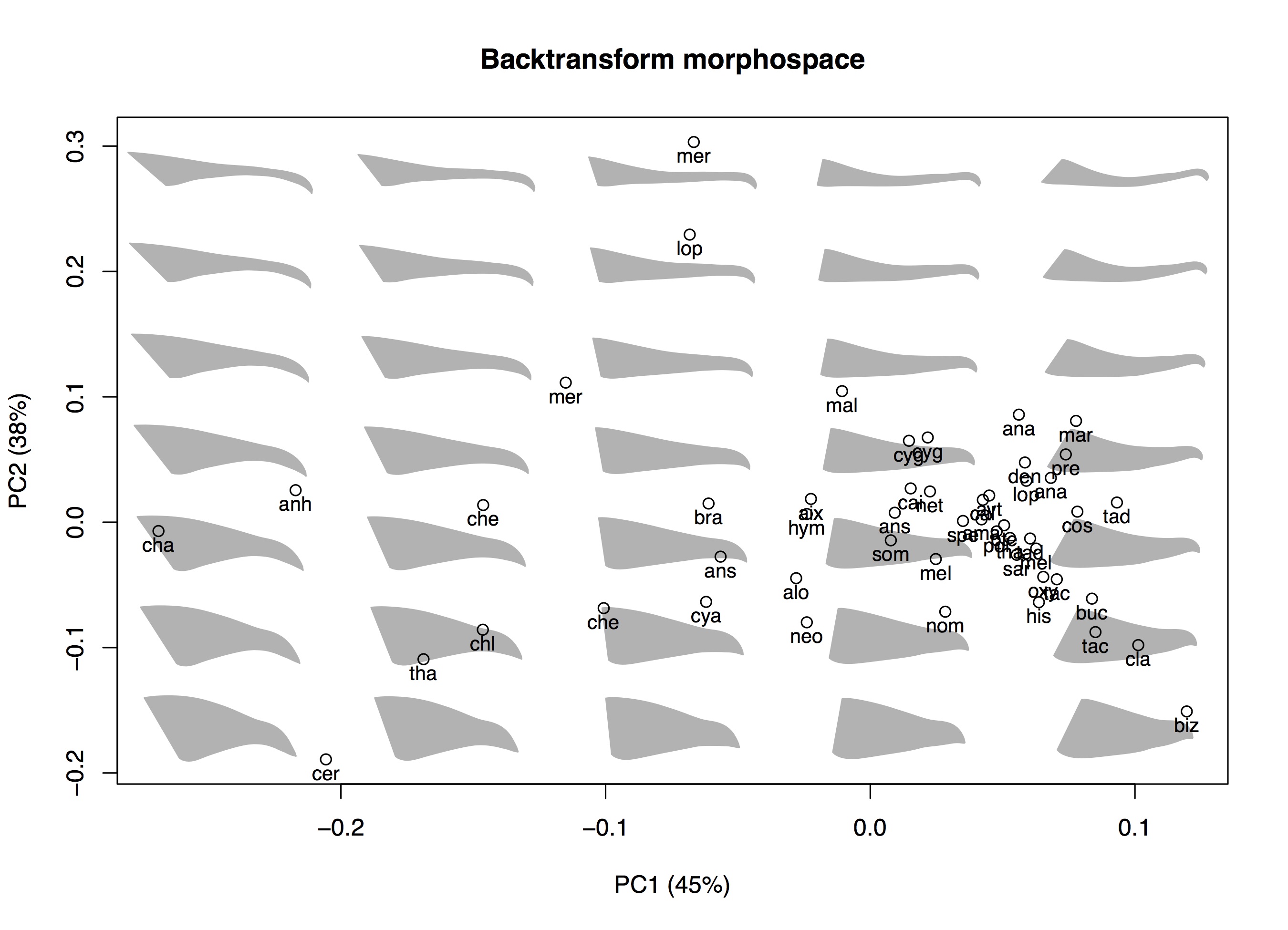 These shapes placed into the background of the plot are "backtransformations" from a principal coordinates analysis, which identifies the major axes of variation with a shape dataset. Importantly, these backtranform shapes are not actual shapes within the input dataset. Rather they are theoretical shapes that represent a combination of two particular PC (principal component) scores and the mean of all the other PC scores. An alternative way to think of these backtransform shapes is that they are the shape an object or specimen would have if it were at a particular point in a 2D morphospace (e.g. at a particular value of PC1 and PC2) and at the average position along all other PC axes.

If most of your shape variation can be condensed into a few PC scores then these theoretical shapes will correspond well to the shapes in the input dataset. A useful feature of a backtransform morphospace is that it shows what shapes look like throughout the entire morphospace, rather than just where you have samples, to create an even distribution for visualization.

If you are using this code for a publication please cite the following paper:

You will also need to have the R packages geomorph and StereoMorph installed. The geomorph package will allow you to perform the Generalized Procrustes Analysis and the StereoMorph package has the function for creating the backtransform morphospace. For StereoMorph be sure that you have a version equal to or greater than 1.6.2 installed since this has the btShapes function. If you have not installed these packages you can install them using the install.packages function.

Once the package is installed, load it into the current R environment using the library function.

The main part of this tutorial will first demonstrate making a backtransform morphospace using 3D shape data and a non-phylogenetic principal components analysis (PCA). Creating a phylogenetic morphospace or using 2D shape data requires only a few modifications to this code, which are detailed after this section.

First we need shape data to plot. These should be landmarks or curve points (either two- or three-dimensional) saved in a three-dimensional array in which the first array dimension is the point names, the second dimension is the xy-coordinates (or xyz-coordinates for 3D data), and the third dimension is each individual/species/etc. For this tutorial we'll use 3D landmark and curve points collected from waterfowl bird beaks, originally published in this paper looking at the correlation between beak shape and diet in waterfowl. You can download these data from datadryad by clicking here. Unzip this folder and move it to your current working directory.

Read the example shape data from the 'Beak shape by species' folder.

Convert the shape data from list of matrices into a three-dimensional array, specifying names along the first and third dimension of the array. This should create a 150 x 3 x 51 dimension array.

Perform Generalized Procrustes Analysis (GPA) using the geomorph function gpagen to obtain Procrustes coordinates. GPA scales each shape to the same centroid size and optimally aligns the shapes (using translation and rotation) based on homologous points to remove differences due simply to differences in position and orientation.

In order to plot each backtransform shape we need to create a function that will take our shape coordinates and produce a graphic of the specimen or object. For example, the function could connect a series of neighboring landmarks to create an outline. How you draw the shape data depends on what kind of shape data you have and how you want the graphic to look, so you will have to create this function yourself. But the function included in this example should serve as a useful template.

You can name the function whatever you'd like. The example below is named plot_beak_lateral. This function takes curve points along the bottom and top margin of the beak and creates a silhouette of the beak from a lateral view. The shape data that are input to this function are 3D so this function just takes a simple projection of the 3D shape onto the midline body plane. You could rotate the entire shape before taking the projection to get a top-down view instead of a lateral view.

The first two parameters to this function have to be the following:

To use this function in other projects you might want to save this function to its own file, for example 'plot_beak_lateral.R' and then load the function at the start of your code using the source function.

Set the two PC axes that you want to plot. For this example we'll plot the first and second PC axes. These are the two PC axes that form the basis of the grid onto which the backtransform shapes are drawn (the shapes will use the average PC scores along all the remaining axes).

For this tutorial we'll create a plot as a PDF file. Open a PDF graphics device where the plot will be produced.

Create a plot box with axes and axis labels. Use the n value for the type parameter to draw the plot without plotting the scores. That way you can add the scores later on top of the backtransform shapes.

Plot the backtransform shapes in the plot box using the btShapes function.

Here are the input parameters to btShapes:

The remaining two input parameters (size and col) are inputs to the plot_beak_lateral function so these may differ depending on how you write your shape drawing function.

If you'd like, you can then plot the points for each species on top of the backtransform shapes.

This should produce the following plot:

The previous section showed how to use a non-phylogenetic PCA to find the major axes of shape variation. However, PCA assumes that each of the data points are independent samples from a population (like a standard linear regression). Since sampled taxa are not independent of one another but in fact related to each other you might want to incorporate the phylogeny for your taxa into the PCA analysis to account for this non-independence. Another way to think about this is that if you had a sample in which many taxa were all closely related and just a few distantly related taxa, you wouldn't want the many closely related specimens to have an outsized influence in determining the PC axes (see Revell 2009 for a nice explanation of this). This section will show you how to create a backtransform morphospace onto a phylogenetic PCA (pPCA) plot.

Then load the packages into the current R environment.

Next, find a tree for your sampled taxa. You can download the tree for this tutorial by clicking here. Save this file in the web browser using 'File > Save' (be sure the file saves with a '.tre' extension and not '.txt'). Then move this tree file ('Burleigh, Kimball, Braun, 2015 ML Tree, pruned.tre') to your current R working directory. This tree comes from a larger tree by Burleigh, Kimball & Braun 2015 and has been pruned down to include just the species in this tutorial.

Load the tree using the read.tree function from the ape package.

You can use the same gpa_mat from the generalized Procrustes coordinates that you created in the previous section but this time it will be used to perform a pPCA instead of a PCA, using the phyl.pca function from the phytools package.

From the phyl.pca results you can get the pPCA scores, eigenvectors, and percent variance explained by each axis, just as for a non-phylogenetic PCA.

Lastly get a vector of the phylogenetic means using the covariance and variance-covariance matrices. This will be input into btShapes.

Set the two PC axes that you want to plot, just as in the previous section.

Open a PDF graphics device where the plot will be produced and create a plot box with axes and axis labels. Use the n value for the type parameter to draw the plot without plotting the scores. That way you can add the scores later on top of the backtransform shapes.

Add the scores and labels onto the plot, if you'd like.

And close the connection to the PDF graphics device.

This should produce the following plot: 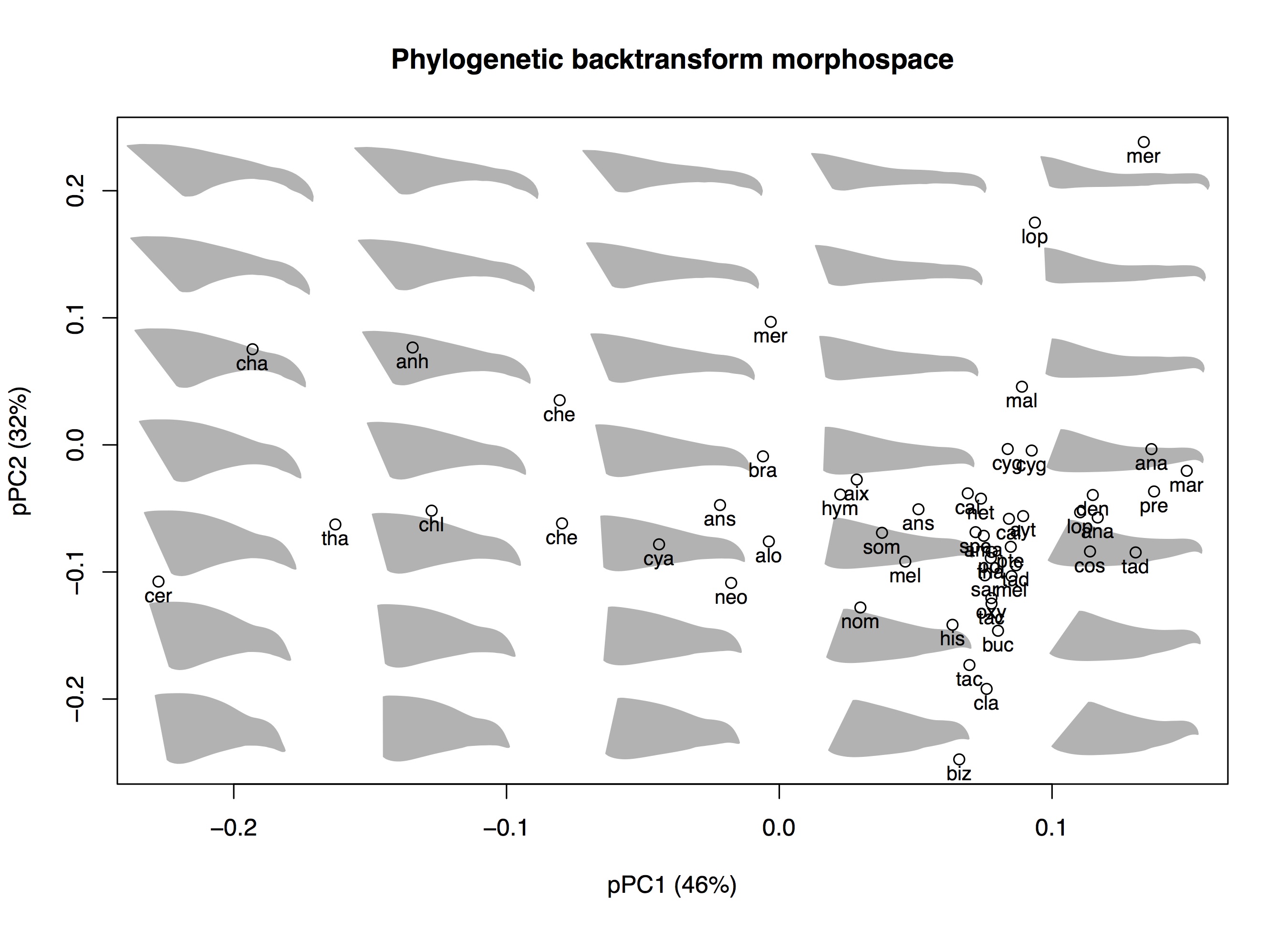 For this particular dataset there is an interesting phylogenetic pattern in that a more goose-like beak (more toward the left in the pPCA morphospace) has evolved convergently multiple times in waterfowl, probably at least six times (Olsen 2017). Once phylogeny is taken into account the variation between a more duck-like beak (probably ancestral) and a more goose-like beak weighs more heavily on the PCA (because they represent more 'independent' transitions). The end effect is that the axis differentiating duck and goose beaks is more squarely aligned with the first PC axis in the pPCA (right) than in the PCA (left).

Creating a backtransform morphospace using 2D shape data only requires changes to the custom function that draws each backtransform shape (the fcn input to btShapes). You can easily convert the example dataset from this tutorial into a 2D dataset by taking only the first two dimensions. Since the beaks are initially aligned from front to back in the xy-plane this removes any data about the width of the beak. After converting the shape data into an array

Then you can run all of the subsequent code as before (you'll need to reduce the size parameter in btShapes from 0.5 to 0.35). Note that the m input parameter to btShapes should now be 2 versus 3. Using dim(lm_array)[2] will automatically account for this by reading the number of coordinate dimensions in lm_array. 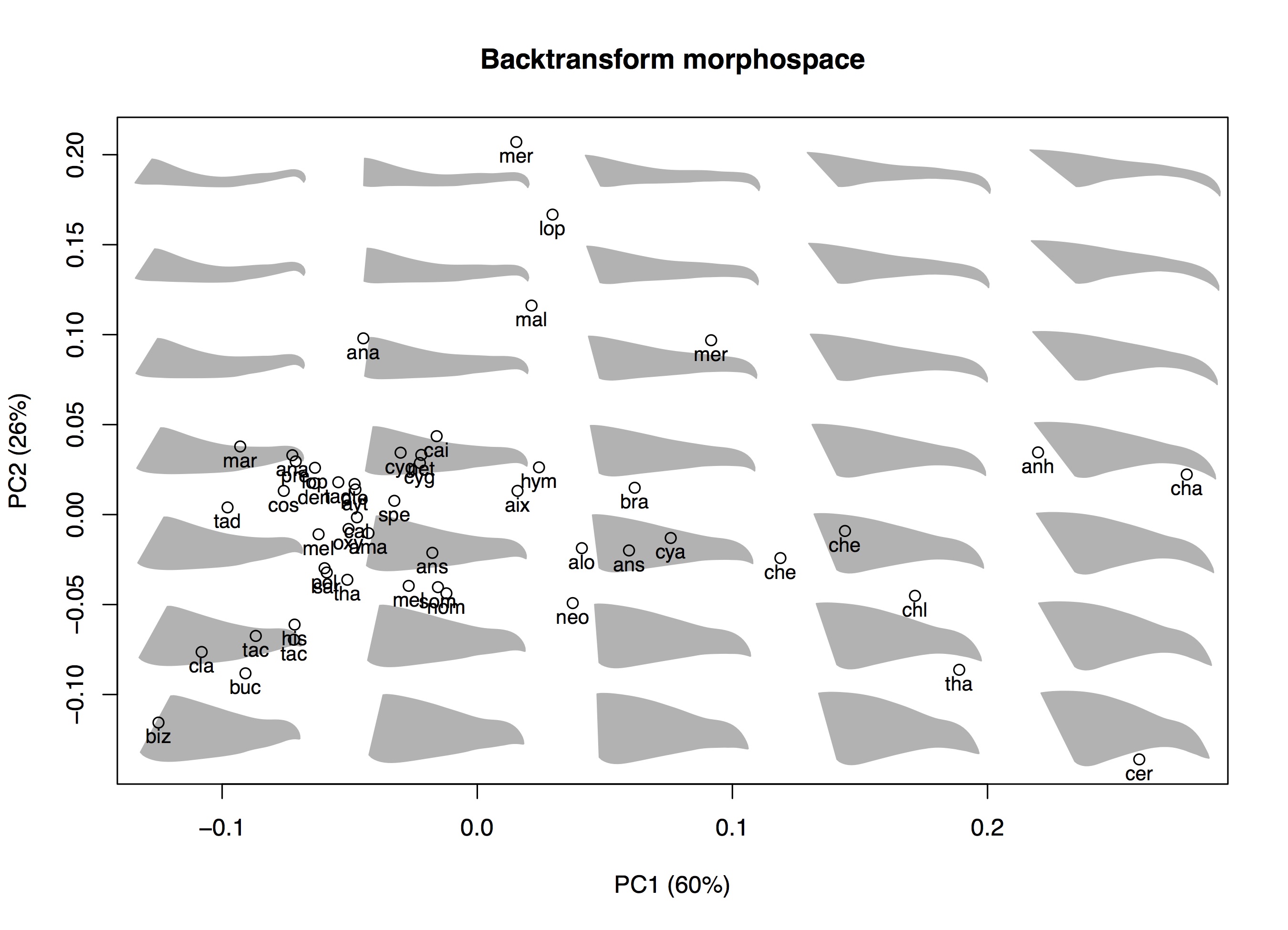 The plot above shows the result of using 2D shape data. The backtransform shapes looks nearly identical because we've used the same two dimensions that we plotted last time (again, ignoring beak width and any shapes in that dimension). So we haven't lost any information for the 2D plane in which we are visualizing the shapes. This wouldn't be the case if we had visualized the beaks from top down.

The percent variance explained has changed a bit for each axis. And note that the positions of the various species in the plot has flipped along the x-axis ('biz' for Biziura lobata, the musk duck, has moved from the right to the left side). This doesn't have any special significance; the orientation or order of the PC scores along each axis in PCA is arbitrary and sometimes the axes get flipped when slight changes are made to the data.

If you are using this code for a publication, please cite the following paper:

Be sure to cite the geomorph package and the R Core Team. And if you created a pPCA backtransform morphospace then you should also cite ape, phytools, and Revell 2009. You can generate the most up-to-date citations for R packages using the 'citation' function.

If you find an error or have a question, please contact me!